Legate Petillius Lucanus was named Supreme Military Strategist to His Imperial Majesty Emperor Clements IV on 107.1.21, overseeing all aspects of Octavius war policy.  In addition to acting as a direct liaison between the Empire and its pilots, Lucanus has direct oversight of the Ministry of War.  He was continued in the position in 114 when the Ministry of War rotated to Martius, though his title was shortened to Supreme Military Strategist, and he was replaced in 118 by Atticus Aqilus , the Emperor’s nephew.

Growing up in the small town of Lorium, in the Treviso Province, Lucanus attended the Collegium Bellum in Eiro where he excelled both in athletics and academics.  Lucanus is known for a very direct and often confrontational style of management, but at the same time achieves his goals, often by any means necessary. 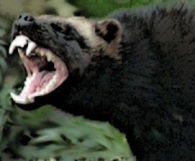 The Tasz is a large rodent-like animal native to the planet Ares Prime.  It has has very dark brown fur, a short snout with very visible fangs and a short tail.   Its large head and neck allow it to generate the strongest bite per unit body mass of any other land predator on the planet.

Its aggressive nature and venomous bite make it a feared predator, and it’s surprising speed make it a very challenging quarry for hunters.

Tasz hunts are a traditional pastime/sport of the Ares Prime royal caste.

The Long-Toothed Ekel, originally native to deepwater lakes on Martius, has been known to grown to more than 15 feet, with a maw diameter of almost eight feet in the largest specimens.   They generally feed on deepwater Thronts, though they are known to attack and consume anything that moves.

While their native habitat is deep water — below 200 feet — Ekels have shown amazing adaptability.  Several Ekels were used as a security measure in a swamp surrounding The Perdios Proving Grounds, where the water sometimes was too shallow to cover their dorsal fins.

Ekels were also alleged to have been used by ancient Octavius warlords as a method of gruesome execution.

The Octavius Empire was ruled by a triumvirate of three emperors, each one believing that his hereditary claim to the throne of the entire Empire is the most direct by both blood and tradition. . This has lead to not one but three different seats of government – one on each planet.

During the years that Octavius was part of the The Reconstruction Initiative Treaty (26.4 AT – 105.10 AT), each member Faction was required to have a “single point of contact” from its Factional government to TRI. After much in-fighting and another brief civil war, Ares Prime was named the “primary” planet of the system, and only its leader could officially use the title Emperor. The leaders of Martius and Cinatus were forced to use the title of Co-Emperor. Once TRI dissolved and reformed as a corporate entity, the illusion of “co-emperors” was swept away.

The Octavius System is located between Solrain and Amananth, and presently consists of 25 sectors. The Octavians have built four space stations – Octavius Core Station, Great Pillars Station, Outpost Station, and Octavius Depot. The primary stations are located near the dominant planets of the Octavius System – Ares Prime, Martius, and Cinatus, respectively.

Ares Prime won the right to be named the “primary planet” of the Octavius system when the Empire joined TRI. In today’s post-TRI era, even though Octavius Core remains the largest station by far, it has been surpassed in trade and traffic by Outpost. 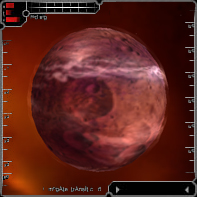 Martius has long been known for its martial academies where the best warriors are prepared for a life of combat and vigilance. Although it’s inhabitants are convinced of their own superiority, the more remote location of Great Pillars station has caused the importance of Martius to flag somewhat in modern times.

Martius retains its visible scar from The Great Collapse when  a huge asteroid crashed to its surface, leaving a crater more than 2,500 kilometers in diameter and wiping out a population of approximately two billion people.

The Cinati take exception if Cinatus is referred to as the “third planet of the empire” – an attitude that might be justified. Owing to its “gateway” location, Outpost has become the leader in trade, and is the station of choice for most Octavian factionalist squads to call home.

Tesios Muca may be most famous for having elected the Duel of Accession after the assassination of Clements I, where he dueled, and lost to Venticus Marius, son and blood-heir to Clements.  Muca had great affection and respect for Venticus — but Muca was a tough-love guy who was sickened by what happened in the assassination. He had great fear for the current state of Octavius and Venticus was concerned with Venticus’ youth and inexperience. Muca reasoned that if Venticus won, it would be a great boost both to his image and to his confidence. If Venticus lost, Muca believed he could manage Octavius through the rough time and then abdicate and name Venticus as his heir at a later time.

Muca lost that duel but Venticus elected to keep him on as Consul.

The following was Muca’s speech at the death of Clements IV, which has quickly become part of Octavius Lore:

Today is a bitter day for Octavius. Clements IV of Ares Prime, true Emperor of all Octavius, has been laid to rest at the Hall of Heroes in our capital city, Trivera.

Though he survived the initial escape pod sequence after being shot down, his injuries were too severe. He has joined his fathers, HEROES ALL.

..ironic that our great leader fell while leading us in the Feast of the Fallen, an event that he was so looking forward to hosting… Apologies–a moment while I calm myself…

*Ahem* We have determined that this was the result of a coordinated assassination plan. Traitors managed to damage the escape pod on the Emperor’s Phoenix.

To give calm speeches when

The children WEEP in Nova Cathargo!

The women of Eiro CRY OUT in anguish!

The men of Trivera demand JUSTICE!

But what justice does the STCC promise?

A slap on the wallet of the barbarous perpetrators of this ATROCITY! It’s said that the Quantar love their rocks and the Solrain love their money

Let us PROVE THIS PROVERB. Now is the time for Octavius to show our enemies the STRENGTH of our devotion. We will BLEED the Solrain.

Octavius is known for its commonly mercenary attitudes, where blood is often thinner than water. This gives rise to all manner of internal power struggles, as various squads and rogue gangs constantly scramble for some semblance of control. The typical mindset of these groups is simply Might Makes Right. Perhaps this is why the weapons coming from Octavius are rarely paralleled in raw power and effectiveness. Ship speeds are slightly lower than other factions on average, though the single engine design often employed does allow for double the afterburn time. A few inter-faction equipment trades can make these vessels some of the most feared in the universe. Civilian life is a constant battle for survival in Octavius. This might shed some light to the large number of volunteers for the jump pilot program, as well as the tendency of most Octavians to trust no one.

This database access point is a work in progress. If you have any difficulties using it — or if you have suggestions on how we can make it better, please let us know by emailing: tri@tri-subspace.net

Check Out These Other Sites